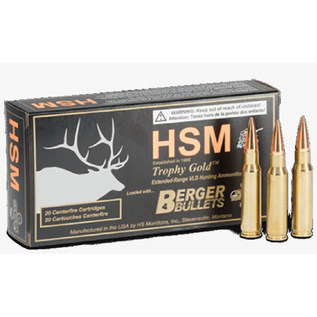 You've planned and practiced. The shot is lined up. It's not an easy shot, but one you know you can make. All that's left is to gently press the trigger. Now comes the culmination. When the round you’ve researched and chosen leaves your barrel you know it’s going to perform as you fully expect. Choose the gold standard of premium hunting cartridges: Trophy Gold featuring Berger VLD bullets. An amazing round that will rival even the best handloads.

Sierra “Game King” bullets have earned superlative accolades for years and years. Now HSM has developed an entire lineup of fine hunting ammunition featuring the time-honored Sierra GameKing/Pro-Hunter bullets. Each caliber's individual components have been precisely matched to each GameKing/Pro-Hunter bullet to maximize their potential for accuracy and performance. So precisely matched that you may think HSM Game Kings are handloads rather than coming out of a factory box. Whatever your quarry, HSM has a Game King cartridge for you.