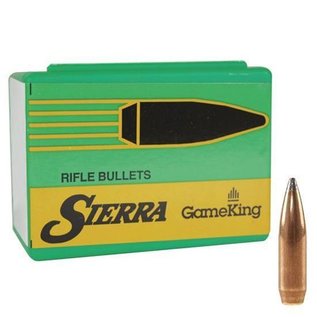 GameKing Bullets: All bullets in this classification are for hunting and all have boat tails. Their shapes include hollow point boat tail (HPBT), spitzer boat tail (SBT), and full metal jacket boat tail (FMJBT). The bullets in this classification have medium to heavy weights in each caliber. With their boat tail shapes, they have high ballistic coefficients, retain their velocities well, and resist crosswinds and vertical winds well as they fly. These bullets are designed for a combination of penetration and expansion in medium and heavy game animals for their calibers.

Spitzer is a term taken from a German word that means sharp pointed. The spitzer shape is readily identified by a characteristic long ogive point shape closing with either a small diameter exposed lead tip or with the proprietary compound tips in Sierra’s BlitzKing bullets. Spitzer bullets may have either a flat base or a boat tail and have much higher ballistic coefficients compared to the traditional round nose or flat nose bullet shapes. The spitzer shape with either a flat base or a boat tail has become the “standard” for hunting bullets today.

Boat Tail bullets have a smaller diameter base, a shape resembling the configuration of the stern of a sailboat. This shape significantly reduces the base drag on a bullet, giving boat tail bullets a significantly higher ballistic coefficient than flat base bullets of the same weight and point shape. Thus, boat tail bullets have lower sensitivity to crosswinds, higher retained velocity downrange, flatter trajectories, and higher energy and momentum delivered to the target than their flat base counterparts.